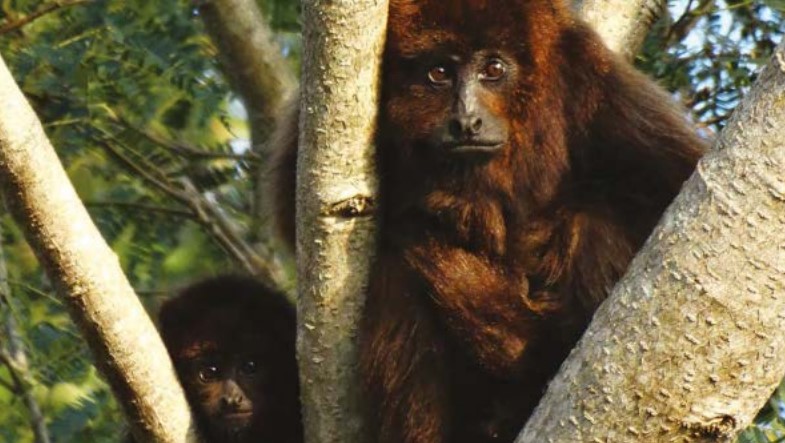 It is estimated that there are only 50 specimens of Alouatta guariba or red howler monkey, a species affected by yellow fever and habitat loss.

The red howler monkey (Alouatta guariba) is an endemic species of the Atlantic Forest which covers part of Brazil and Argentina. It was included between the 25 primates most threatened of the world, in a list published every two years by the International Union for the Conservation of Nature (IUCN) and the International Primatology Society (IPS). The recurrent outbreaks of yellow fever and habitat loss have caused this alarming population decline. It is estimated that there are only 50 individuals.

This is the first time a primate that inhabits in Argentina appears in the list called Endangered Primates, which is made in order to call the attention of government agencies to take measures on the imminent extinction of those species. This categorization will be specially taken into account for the implementation of the National Plan for Primate Conservation, in which CONICET researchers are working together with other governmental and social actors.

The list of the world’s 25 most threatened species was defined in the 2018 International Primatology Congress in Nairobi, in which CONICET associate researcher Luciana Oklander –a specialist who works at the Instituto de Biología de Misiones (IBS, CONICET – UNaM) – participated in the deliberations. She was part of a group of primatologists of the regions who were in charge of substantiating why the situation of the red howler monkey was critical and can disappear if no concrete actions are taken.

“Apart from its habitat loss, a factor that affects several animals globally, the red howler monkey faces another concrete threat: yellow fever. Its last breakout, which started at the end of 2016 affected a great part of the South East of Brazil and fortunately did not reach Argentina, caused the death of thousands of monkeys and devastated populations of Alouatta guariba as well as Alouatta caraya”, the biologist indicates.

The red howler monkey lives east of the province of Misiones and according to estimates made by the researchers, in Argentina, there are only 50 individuals of Alouatta guariba clamitans, one of the two subspecies recognized. Most of them are in protected areas, such as the Provincial Parks of Moconá and Piñalito, although there are also individuals outside those areas and could be protected by enabling new corridors.

Nevertheless, the Argentine population of Alouatta guariba has reduced considerably and that forces specialists to analyze other strategies. “An alternative that we are evaluating is the possible introduction of monkeys of this species from Brazil so as to reinforce the remaining populations,” Oklander explains.

The province of Misiones has large areas of pristine environment that could serve as a home for the red howler monkey that are rescued in the neighboring country. “There are specimens that are run over, electrocuted or attacked by dogs and are sent to rehabilitation centers but then, they have no place to be released. A good option would be to bring them to Argentina because if we do not protect the remaining populations and stimulate their reproduction in some way, the red howler monkey is not likely to survive another yellow fever outbreak,” Oklander explains.

This can be one of the measures implemented as part of the National Plan for Primate Conservation, which is being developed in Argentina following the guidelines of the IUCN and with the participation of researchers from CONICET and organisms from national and provincial states. “The information included in the plan already considered Alouatta guariba as the most threatened species of Argentina, but now that there is an international agreement we are provided with more tools to manage protection actions,” Martín Kowalewski explains. He is a CONICET independent researcher at the Estación Biológica Corrientes and is one of the leaders of the project.