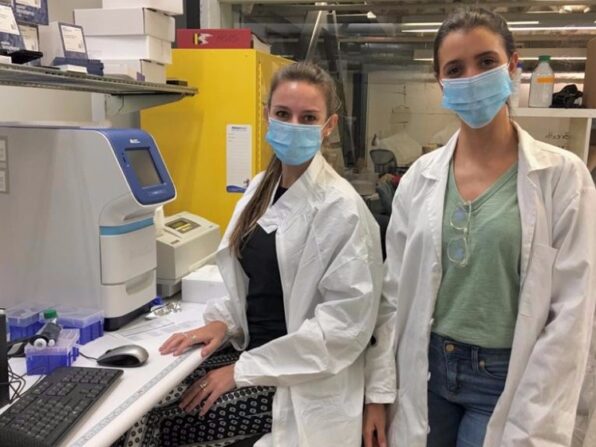 In order to advance the development of a rapid test to detect the virus that causes COVID-19, CONICET researchers are working from laboratories in the city of San Francisco, United States. Their task is part of a project of the starup CASPR Biotech, a technology-based company created under the regulations of the Council, which aims at using CRISPR technology to create a portable diagnosis kit to identify the genetic material of SARS-CoV-2.

Last week, three women scientists who conduct their studies at institutes in the provinces of Misiones and Santa Fe joined the research team that has worked in the USA since March. The objective is to enhance the necessary techniques so as to have the test ready in two months and to be evaluated and authorized by the control agencies in our country and the United States.

Adriana Rinflerch is a CONICET assistant researcher at the Instituto de Biología Subtropical (IBS, CONICET – UnaM) and travelled some days ago to San Francisco. “I’m going to be working in the laboratory for a month. Mi task is linked to the amplification of the sample. Our aim is to optimize a molecular diagnosis technique so that the entire process occurs under similar conditions,” the geneticist explains. She has joined the team along with Antonela Palacios and María Eugenia Llases, postdoctoral fellows of the Instituto de Biología Molecular y Celular de Rosario (IBR, CONICET – UNR).

The technique used by Rinflerch is the loop-measured isothermal amplification(LAMP), which is similar to the polymerase chain reaction (PCR), but performed at the same temperature for which does not need a thermocycler.

Other teams are in charge of different tasks, such as sample processing, protein identification, or detection of the final product.

The ease of access to supplies is the main reason why part of the kit design is developed by Argentine scientists in the United States. Besides, the leaders of the project explain that, as the kit is developed in laboratories in that country, it will be easy to access the circuit of evaluations of the U.S. Food and Drug Administration (FDA) and, later, of the “National Administration of Medicines, Food and Medical Technology” (ANMAT) of Argentina.

To go to San Francisco and join the team that seeks to have this key resource to contain the pandemic, the scientists were transferred in one of the special flights arranged by the National Government to repatriate Argentines stranded abroad due to the closure of borders. “We managed authorizations of the Ministries of Science and Technology, of Transport and Public Health. That allowed us to travel by land to Ezeiza and from there travel to Miami in one plane that came only with the crew. There we had a connection to our final destination, on a flight that also had very few people,” Rinflerch says. She also states that they are maintaining strict distance measures and personal care to guarantee the safety of the research team.

Diana Ibáñez is also a member of the team. She is an IBS doctoral fellow who traveled to the Unites States in March with a special authorization. From there, she has worked in coordination with her director Federico Pereyra-Bonnet, a CONICET researcher at the “Unidad Ejecutora de Investigaciones en Producción Animal” (INPA, CONICET-UBA) and member of the CASPR Biotech, who is Buenos Aires.

Both Rinflerch and Ibáñez belong to the Grupo de Investigación en Genética Aplicada (GIGA) of Nodo Posadas of IBS. They knew the scientists who participated in CASPR Biotech in 2019, when they carried out tests for dengue rapid diagnosis kits in the cities of Posadas. “Although now the focus is on optimizing this system of COVID-19, the enhancement of the techniques and the new knowledge will be useful for other viruses, even for genetic diseases and even certain types of cancer,” the researcher explains. She works in the creation of an in vitro testing platform for the implementation of precision medicine in skin cancer.

“There are projects from other countries that use CRISPR for diagnosis. If we manage to obtain the results we want, it will be possible to offer a more accessible, quicker and lower cost system, in a format similar to that of the marketed massively pregnancy tests,” the scientist concludes.

Please go to the Instagram Feed settings page to create a feed.