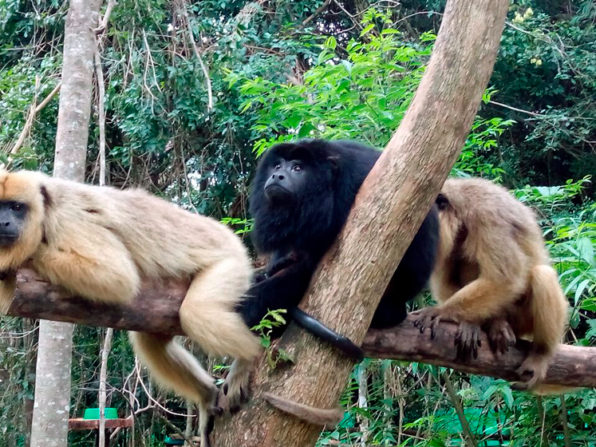 A new study identified the genetic assignment of the population of primates of the species Alouatta caraya and determined from which of them the specimens that were rescued from illegal trafficking come from. The results will allow experts to infer the critical point of capture and guide the future efforts of the reintroduction in the correct place of origin.

The study, which was published some days ago in Scientific Reports, established that in Argentina there are three clusters genetically differentiable. Most of the animals confiscated belong to an area that comprises the provinces of Formosa, Chaco, Corrientes. Other scientists who participated in the study work at the  Instituto de Biología Subtropical de Misiones (IBS, CONICET – UNaM); Servicio de Huellas Digitales Genéticas y del Departamento de Microbiología, Inmunología y Biotecnología of the Facultad de Farmacia y Bioquímica de la Universidad de Buenos Aires (UBA).

In the last decades, the populations of Alouatta caraya that exist in the country have been threatened by habitat loss and capture for illegal trafficking. For this reason, they are closely studied by biologists and experts in conservation. “From samples that have been taken since 2005 in different localities of Argentina, we managed to obtain a reference database analyzing the genetic characteristics of fifteen populations of these primates in the northeast region. We compared this information with the data of twenty-two individuals that were taken from the illegal trade and managed to know the place of origin of twenty-one of them,” explains one of the authors of the study, CONICET associate researcher at the IBS, Luciana Oklander.

The research work comprised the rescued monkeys of illegal trafficking that were located at the center Güirá-Oga of Puerto Iguazú, in Misiones, and in the “Zoo Station La Esmeralda” in Santa Fe; and the three individuals that were found dead in other cities. The results allowed the experts to identify three genetically identifiable clusters: one of them groups the populations of the province of Misiones and Río Uruguay; the other includes the region of Corrientes, Formosa, and Chaco; whereas the third comprises the area of Río Paraná, where the environment is better preserved.

During the studies, the researchers determined that most of the individuals confiscated belonged to the second genetic group. This indicates that the trafficking of howling monkeys originated mainly in the area of the provinces of Formosa, Chaco and Corrientes.

To conduct this study of identification of geographic origin, the researchers used a method that marked the repetitions in simple tandems (STR, also known as “microsatellites”). There are antecedents of the use of this methodology to multiple approaches with several species such as lynx, turtles, elephants, bears, salmon, and macaw, among others.

“This new approach from the study of genetic data allows scientists to direct future reintroductions of the species to that they could be done in the places of origin and to minimize the possible negative effects linked to the introduction of genes and foreign pathogens to a population,” Oklander explains.

The species Alouatta caraya is globally classified as “Almost Threatened” by the International Union for the Conservation of Nature), but it is considered “Vulnerable” in the red list of Argentina due to the reduction of the population, the decrease of the area of occupation or the quality of the habitat, the increase in the exploitation due to hunting or illegal trafficking and the effects of the pathogens and parasites.

Please go to the Instagram Feed settings page to create a feed.