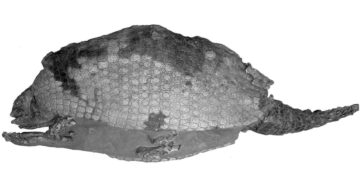 During the last 30 million years until their extinction 10 thousand years ago, glyptodonts were one of the great mammals that inhabited South America. With their body completely protected with a shell, these mammals were among the most impressive of the continental fauna and managed to migrate to Central and North America.

Despite the great number of fossil species of glyptodonts that exist in the entire American continent, the evolution of these great herbivorous mammals has some uncertainties. In order to know more about this process, Argentine and North American scientists plan new studies.

During a recent trip to the USA, researchers at the Centro de Ecología Aplicada del Litoral (CECOAL, CONICET– UNNE) in Corrientes began a joint study with scientists of the Museum of Northern Arizona. The research was about one preliminary analysis of the different collections that contains remains of glyptodonts. This first meeting allowed scientists to exchange ideas about the species from different parts of South and North America and to formulate new hypothesis about the diversity of these mammals. At the same time, those theories are going to be examined as part of a joint project with researchers at the Museo de La Plata and experts from other countries in the future.

“According to the remains recently found in Venezuela and Brasil, our studies have shown that North American glyptodonts entered South America at some moment of the Pleistocene, a fact that is possibly related to glaciation that transformed Central America into an enabling environment for migration. So this species had not only arrived in North America but also come back to South America some millions of years later with a different gender”, Alfredo Zurita, CONICET independent researcher at the CECOAL and main specialist in glyptodonts, explains.

Unlike other related mammals (such as sloths and armadillos), glyptodonts were not studied in depth despite having been so common in all America. The aim of Argentine and North American paleontologists is to carry out a detailed study comparing the diversity and evolution in South and North America of the glyptodonts, one particular subfamily within glyptodonts. With these results, scientists will be able to establish differences or similarities these mammals had in the various areas and get to know more about their evolution.

With the North American team led by paleontologist David Gillette of the Museum of Northern Arizona, Argentine scientists visited different paleontological collections that have material on glyptodonts. “This meeting was essential for both research teams because it allowed us to compare ideas, interact and enlarge the prospect of the studies on glyptodonts and their migratory process carried out in the entire continent. Furthermore, it produced a new prospect so we have to begin to work on radically different concepts based on a very slow morphological evolution and on the fact that the diversity had always been greater in South America compared to Central and North America”, the researcher explains.

“It was thought that glyptodons had evolved quickly since they entered North America because they found a different ecosystem to get adapted to. However, what we observed now is that they were nearly no important morphological changes in almost 4 millions of years. In fact, it is possible that 4 million years old fossils and 30 million years olds correspond to the same species. Even its geographical distribution was fairly limited as no glyptodons reached 35 North latitude. The diversity of glyptondts in Central and North America seems to be surprisingly low compared to what we observe in South America”, Zurita states.

“This new prospect makes us reinterpret a lot of information we thought we knew about the evolution and diversity of glyptodonts in general, in South and North America. This is an interesting process, typical of science: sometimes one has an idea for decades but cannot affirm it because there is something missing. Both researchers at the USA and us had to face the same situation and this meeting allowed us to adopt new perspectives for all”, the paleontologist concludes.

This piece was originally published on
CONICET. It can be found in its entirety here